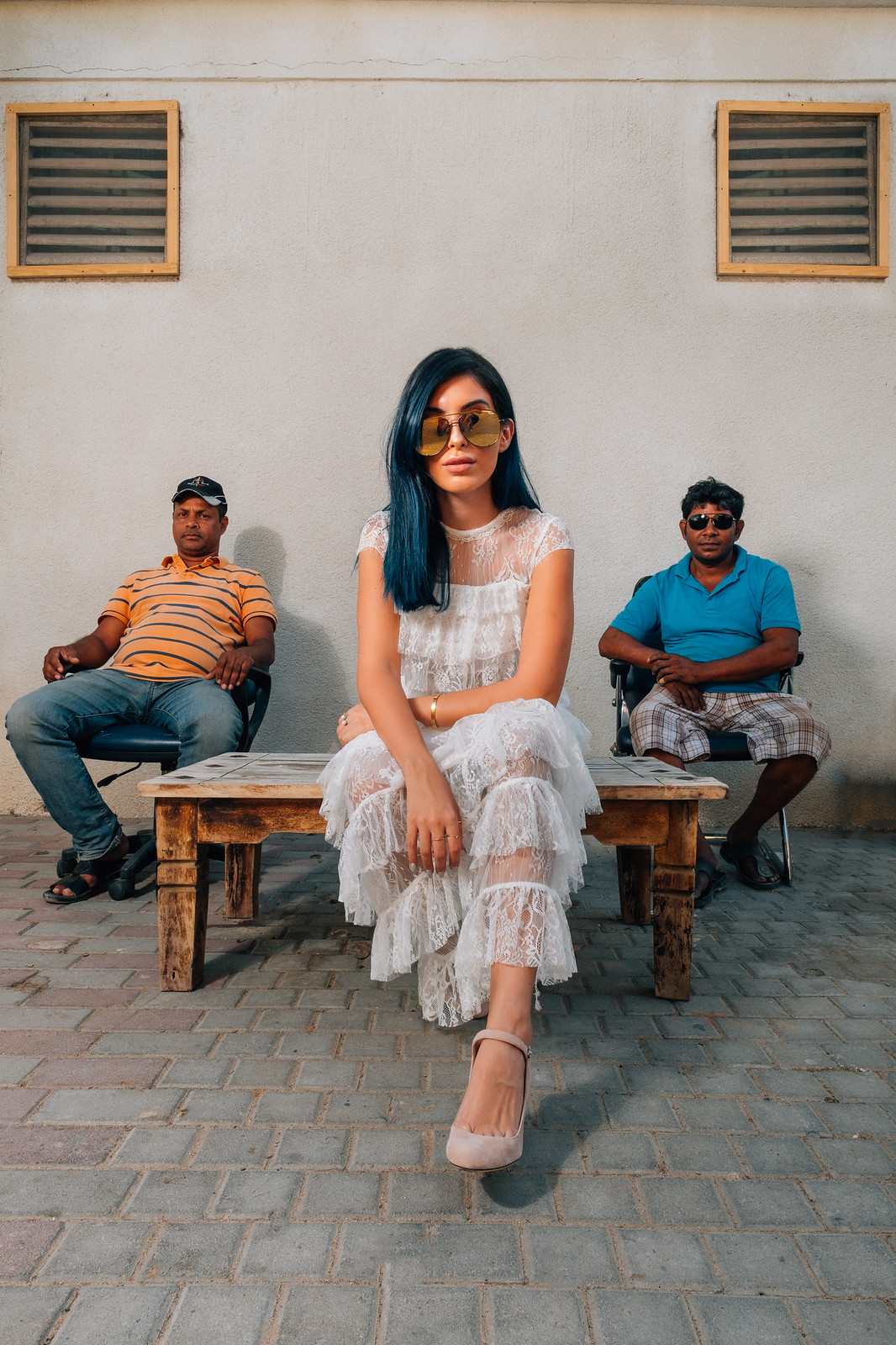 I’ve been asking my self this question after being bombarded with (usually constructive) criticism on a series of images I created with Tala Samman (@myfashdiary). I had been in a bit of a creative rut when I contacted Tala and said I wanted to get out there and shoot something with her. There was no reason or message behind these images when we created them, no planning either. One of my favorite quotes by Chuck Close that Zack Arias uses a lot in his workshop goes like “Inspiration is for amateurs, the rest of us show up and get to work.” So we showed up and got to work. This is exactly the same thing I did was Azza Al Mughairy (@azzaalmughairy) last year in “Throwback Abu Dhabi”. Click it to view that project.
Before you make a judgment I think you should know a little about me. I was born and raised in downtown Abu Dhabi. The first thing people ask is my nationality and that’s something I refuse to answer because I don’t want you putting me in a little box in your mind based on whatever experience you’ve had with that particular nationality. And no, I didn’t just make that up, whoever knows me knows that about me and it’s up on my bio in the Contact section. Click it to check it out. As an adult, I spent the first 10 years of my career as an engineer in the oil industry where I frequently spent several days in labour camps or offshore sites while rooming with 4-8 people. I slowly switched my career to the content creation world I’m in now. I am where I am now by the grace of God first, the sacrifices my family made second, and my own sweat third.
I am not an artist and I’ve never called myself an artist. I think I’m a pretty good technical photographer, I’ve got enough knowledge to educate others in that area, however, I’ve got a long way to go in terms of educating myself in matters of content and culture.
Having said that, I hope you believe me when I tell you that I don’t see “Us vs Them”. I don’t see race, color, or class division because I AM all that. I AM a bunch of races and colors and classes. I feel at home in areas like the ones in the photographs because, well I grew up there, its was part of my first 10 years of my adult life, and I still frequent it today. 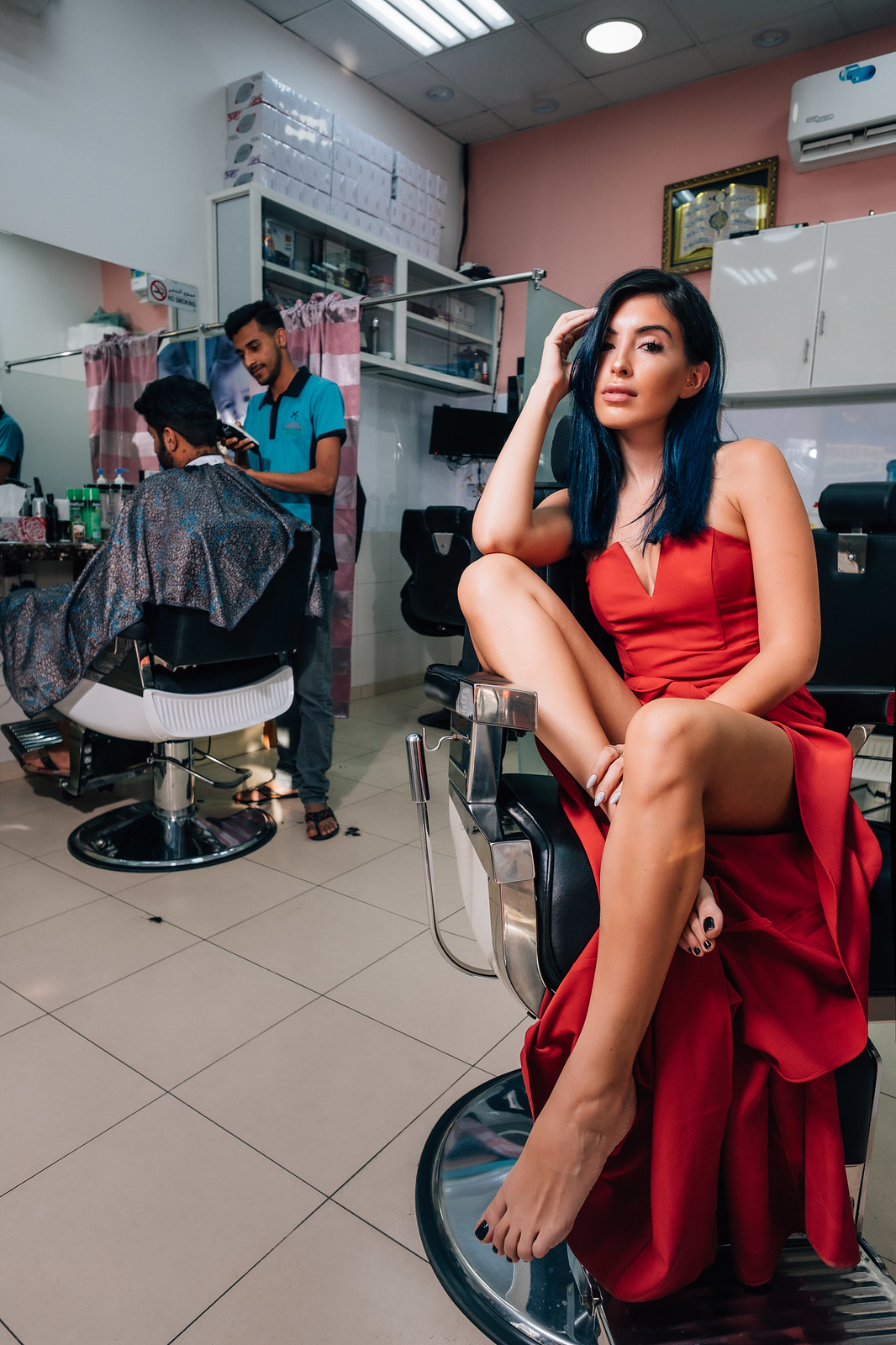 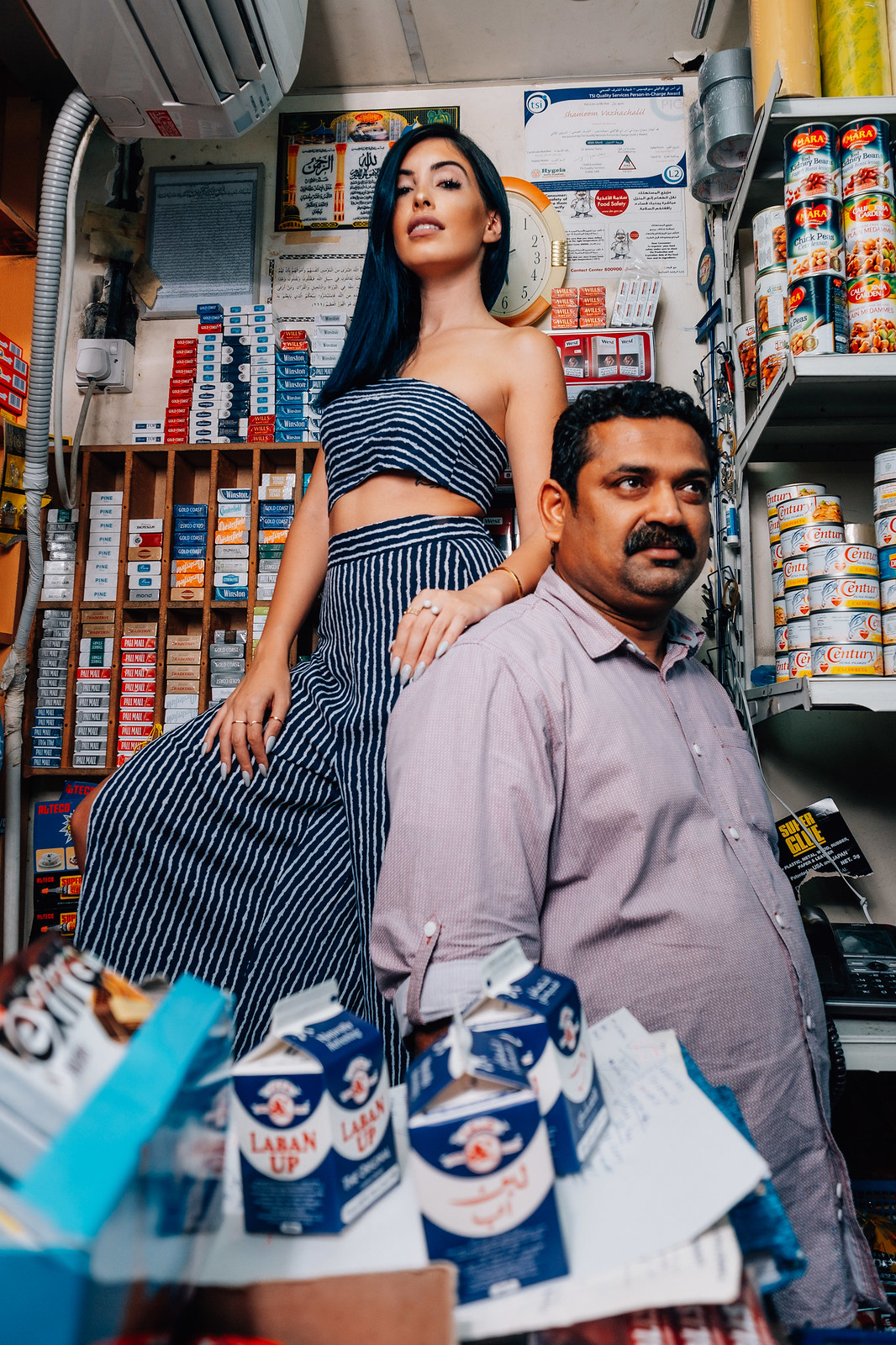 I’ve seen poverty first hand in Dharavi (the 3rd largest slum in the world) and Joe Slovo (a slum in South Africa) and our brothers and sisters in the UAE are well above the poverty line. They might be less fortunate than me and you, but no, this is not poverty. I’m also not exploiting them to sell anything. There’s no message here, we’re just having a good time, and so are they. We were shooting Tala on her own against some backdrops, then they brought us tea and water and wanted to be involved, so we got them involved. The photos after that were staged based on the first photo because we like the idea of having whoever was around involved and they loved it. We explained that these are going on Instagram, they were genuinely concerned about magazines and advertisements and we said they weren’t being used for anything like that. We parted ways after offering a payment which they gladly took. Everyone was happy. The people in the photos are all regular people, working the barber shop or the grocery store nearby, they are healthy and not starving, they don’t need any help (they actually helped us by giving us tea and water). No one is depicted in a negative way or at their most vulnerable state. So is this really poverty porn?
Let’s ask the general public. I put out a poll that asked if this photo was offensive and here are the results. Yes, I agree, its a small sample of people (109 people) but that’s what I have access to so feel free to take it with a grain of salt. 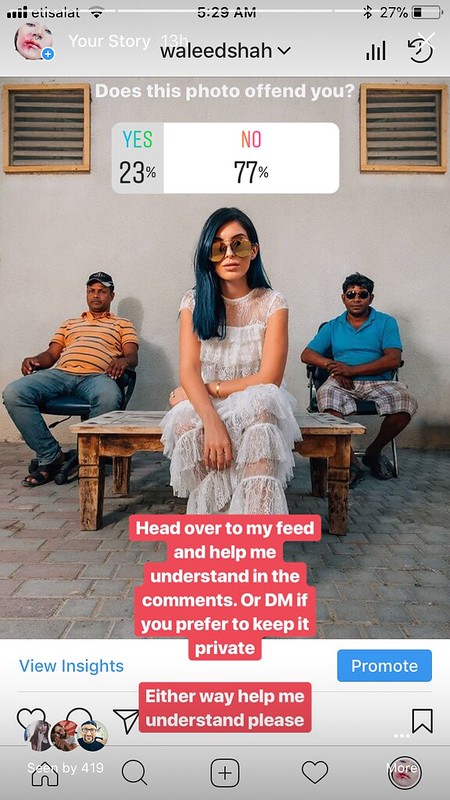 We talked earlier about the 23% that would say this is poverty porn, now let’s talk about the 77% that don’t think it is. That school of thought believes that anytime there’s an image of anyone that is stereotypical of lesser means then it will automatically be viewed in a negative light, regardless of the intention or process. Quote from a friend, “For a lot of people the idea of different classes and races is a touchy subject, however, it needs to be spoken about, this does exist so turning a blind eye to it and pretending it doesn’t then when you get bombarded with it and you get offended is wrong in practice.”
I also had a conversation with Tala and her thoughts were “If someone chooses to see the color difference, they obviously are racist to begin with and that’s the real problem. I never once looked at color difference in those photos, we are different ethnicities in an international city – which is beautiful. I truly think for someone to call those pictures racist, have a racist mindset. So to highlight a divide and racism, the problem is the person looking at that photo because that’s the true reason we still have racism and divide in the world. The guys don’t look unhappy, they weren’t forced, we didn’t depict them in any way, this is their community – one of the most nostalgic areas in Dubai. Of course, people can read into it into a million and one ways, just how you can read any piece of art. How you read things is based on what you’re taught and how you think – the artist is not to blame for that nor is the artist supposed to agree with everyone’s mindsets

An article in The National Newspaper titled “Scandal in Satwa: the fashion shoot in old Dubai that sparked a debate about cultural appropriation”