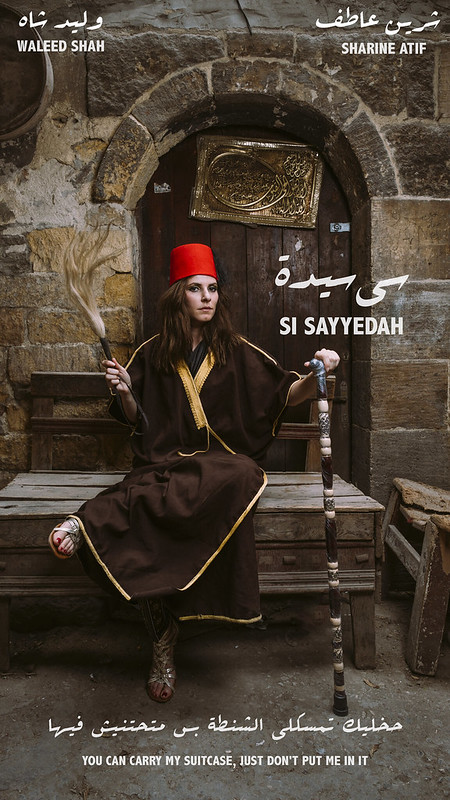 I met Sharine Atif almost as soon as I landed in Egypt. She’s a filmmaker by design and you should totally check out her movies I am not Free, His Cucumber, Perfect Wife, With the Shoe, and the Trailer to her 15-min Thesis film Jebel Banat, which is based on a Bedouin (Nomadic) legend about 2 sisters escaping forced marriage. Jebel Banat is now awaiting approval in worldwide international film festivals so stay tuned!

We tried to plan a shoot with a larger production but finally decided we would go to Khan El Khalili, mix in with the locals and have them help out with the shoot. First met up in out of the oldest and most significant cafe’s in town, El Feshawy Cafe. It was the place that hosted kings, princes, famous artists and intellectuals who narrated various stories and events that passed from one generation to another about the place since it was built in 1771 AD. I was surprised when the manager was open to us shooting photos in such a significant spot especially when I busted out my strobe and beauty dish. 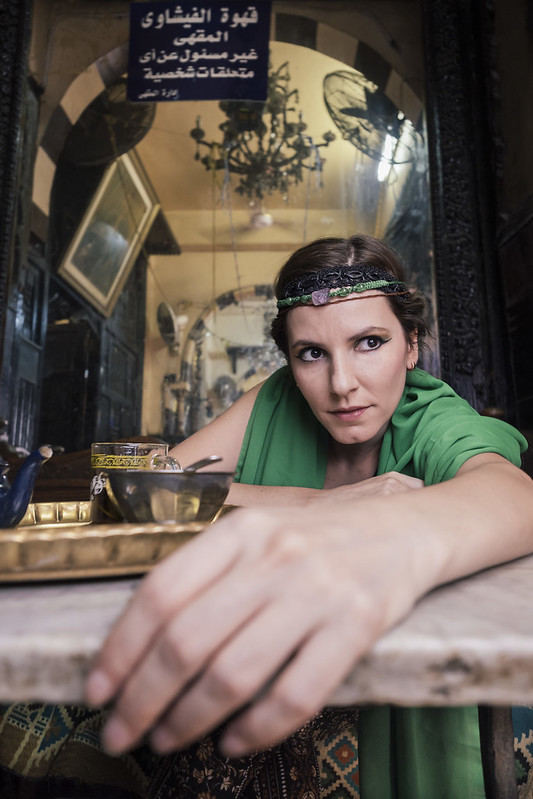 The idea that queens or goddesses are a myth really strikes me. I loved the power of imagination when growing up as a kid. There were no limits, and everything in my mind was possible. Not just in my mind, I actually believed in it so much that all that was in my mind was my reality. I grew up and got hit with the bitter truth. There was no such thing as a tooth fairy or unicorns. And queens were at their time’s queens, earning this title because of being born from royalty or married to a king. 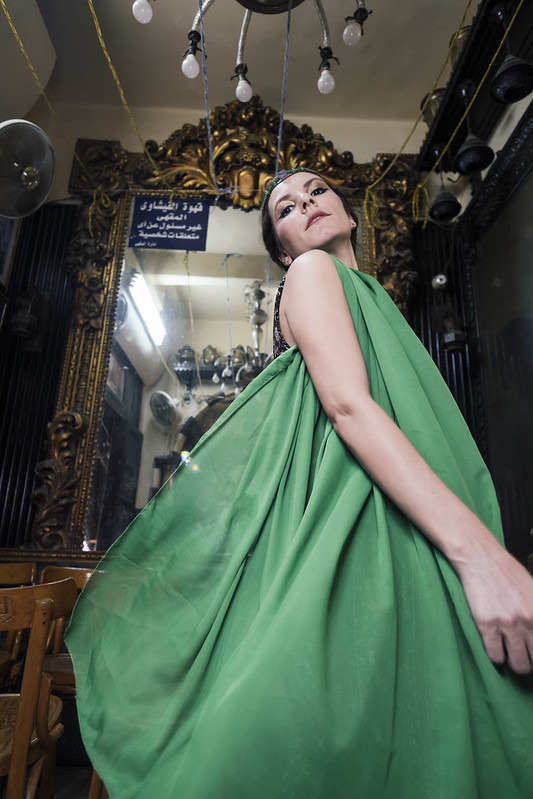 Whenever I read something, in myth, fiction, or even religion, that seemed unbelievable or not making sense to my logic, I dig deeper to grasp their perhaps metaphoric meaning. My logic might question if there is really a hell in the afterlife for those who will pay for their bad deeds. I realize this actually happens in present time while on earth. I’ve seen others and even myself making wrong or bad choices and suffering in a “hell-like” situation as a consequence. I’ve learned that we don’t have to take everything in its literal sense. 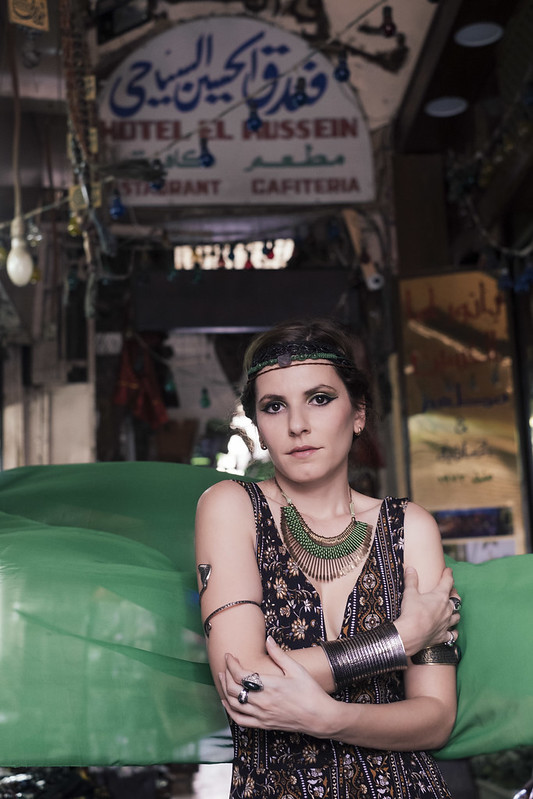 You are a queen if you believe it deep inside. You can define what that means to you. Not the literal queen. But if you act like one, live your life like one, are treated by others as one, how could you not be a queen? Live your own methodology. 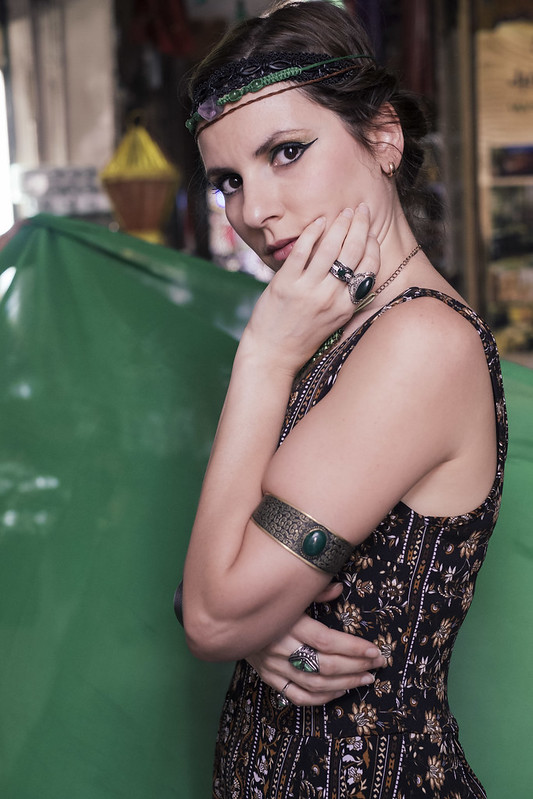 A prominent filmmaker in a Masterclass at my school CalArts once said, “People are not powerful because of how much money they have, or by what they do. People are truly powerful when they actively live out their mythology, and I believe Cleopatra was a powerful woman who actively lived out her mythology and that’s why I’m interested in making a movie about her.” Shekhar Kapur

We then moved on to hunt for costumes and jewelry and that’s when we met Magdi, I shopkeeper with no shop name or Instagram account to point you to but he was kind enough to show us around other shops when we didn’t find what we were looking for at his. We found a spot we like with large blue arced doors and met Abdullah Yasser from the Galabiya shops next door who lent us the pieces for this series. 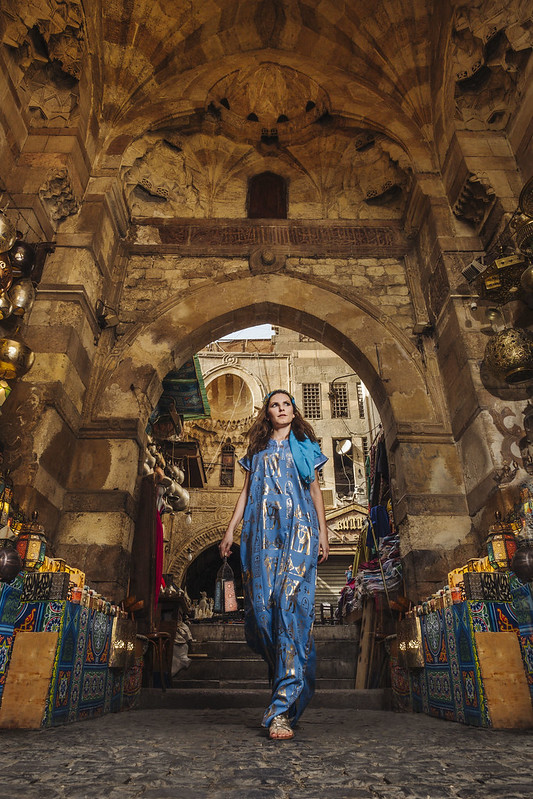 Just above, I spoke about how we can rationalize the fiction into reality. The fiction can become real but on the flip side, the real can also be turned into fiction. Writers and artists tend to use this approach when they want to highlight political and philosophical ideas.

I was very inspired as a child when reading Alice in Wonderland. Now as a grown up I re-read it and understood it in a whole new light. We are all different types of Alice’s exploring different wonderlands. Alice’s conversation with the cat is a favorite… 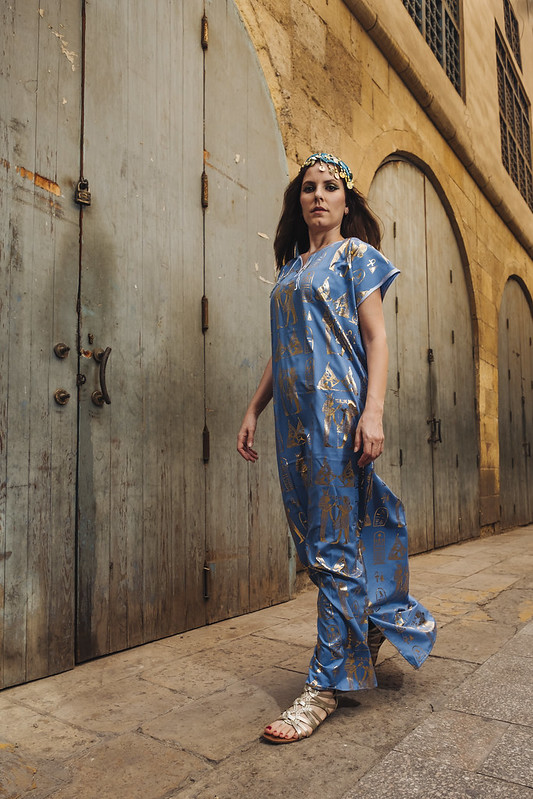 “Would you tell me, please, which way I ought to go from here?” said Alice
“That depends a good deal on where you want to get to,” said the Cat.
“I don’t much care where–” said Alice.
“Then it doesn’t matter which way you go,” said the Cat.
“–so long as I get SOMEWHERE,” Alice added as an explanation.
“Oh, you’re sure to do that,” said the Cat, “if you only walk long enough.” 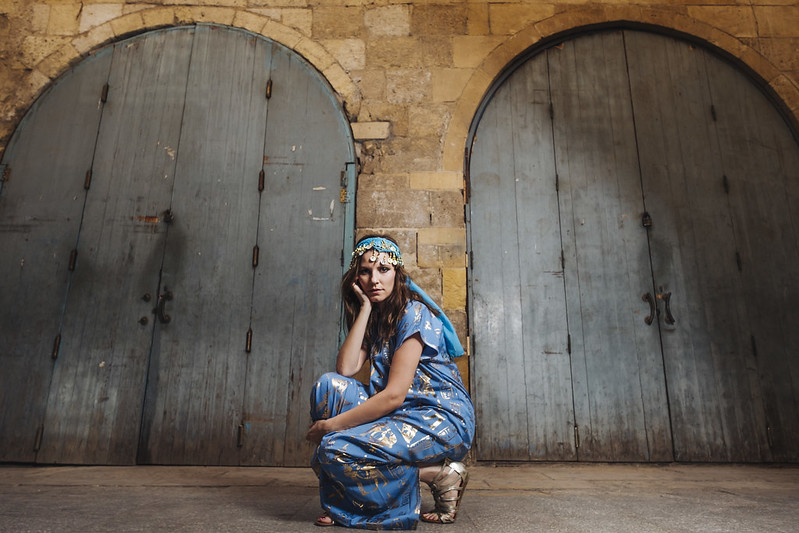 Aside from the many scholarly interpretations or what the writer himself may have intended while writing this, I’d like to share what it meant to me. We all experience the feeling of being lost in the world. We sometimes fear we are walking in the wrong direction. We worry about each path we take and where it will lead. Alice makes it clear she just wanted to get somewhere and even though she explains she did not have a certain destination, she was still concerned about which road to take. We all want to get somewhere, even when we might not know where exactly, even when we don’t know which road to take. It’s important to have a dream and it’s not wrong to have a destination, but don’t be too obsessed and overly consumed by reaching it. Enjoy the walk on the way, smell the roses in the parks you cross, and learn the lessons from the mistakes that strays your way… it’s never about the destination, it’s always about the journey. 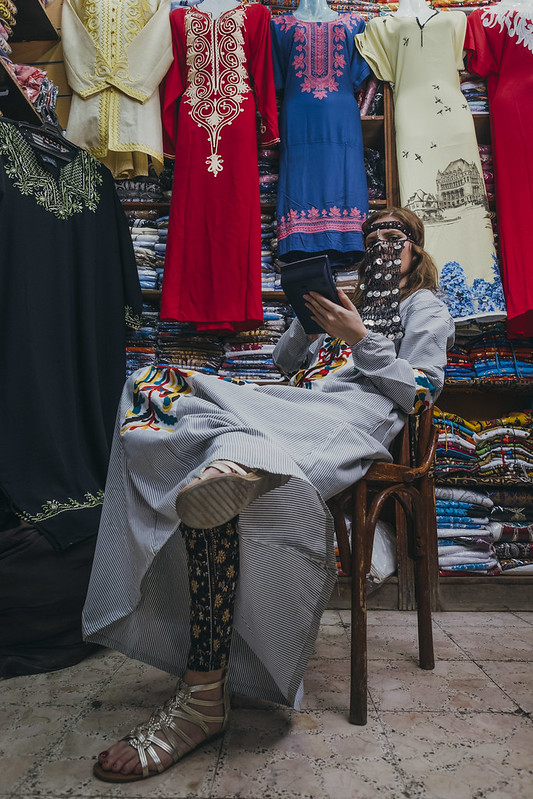 And if one day your journey brings you to Egypt, Cairo specifically, it is a great place for exploration with no end. It amuses me how I keep discovering hidden gems in this city. As a first impression, we tend to see the surface, the cliché, the outside cover of the book… the magic lanterns, the traditional clothes, the food, and the markets. Maybe if you’re a tourist passing through… but only a true traveler and explorer can dig in the depths of a place to experience its magic, only then, it becomes a wonderland, and you, an Alice in it… So are you a tourist or traveler? 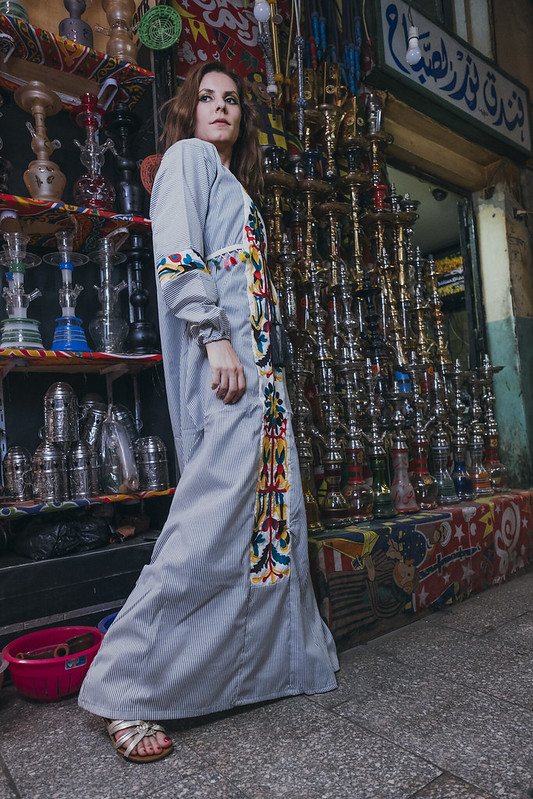 Just before calling it quits we turned a corner and found a shop that rents out costumes for tourists to take photos in. It took us about 15 minutes to explain to the shopkeeper that we wanted Sharine to wear the male outfit. It was pretty funny watching the light bulb turn on in his head when he understood what we were trying to do and was on board with the idea after that. We called this series… 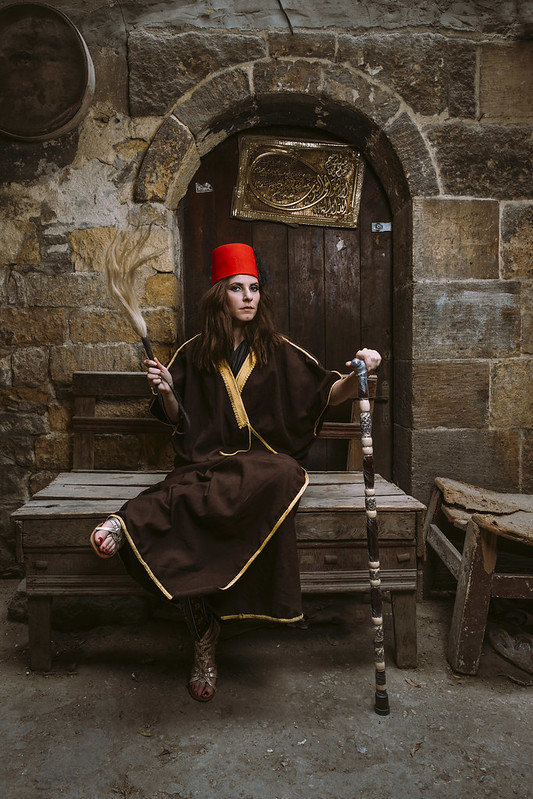 We live in a patriarchal world. And not just in Egypt, where it all started for me with lived experience, but also in the USA as I live between NYC and Cairo. The problem of gender discrimination has become so normalized worldwide that women themselves start to oppress other women and even oppress themselves. When I started having the impulse to make films, the idea was to tell men to stop! They were angry films attacking men, accusing them, and trying to change them! This was a failed approach. It was a long journey before I could understand that the change we want to see needed to come from us. Women needed to take matters into their own hands and stand up for themselves. 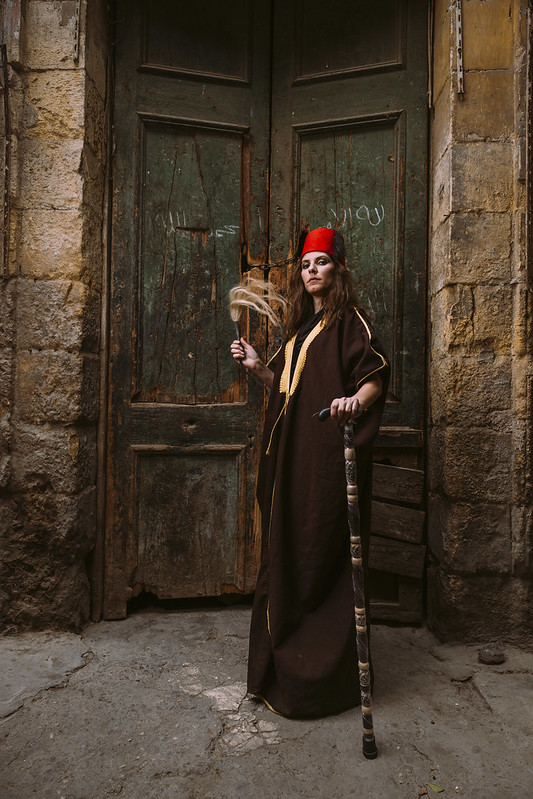 I remember a time when a young woman got inspired by a short film I made about me standing up for myself. I decided then that all my films would highlight women taking matters into their own hands, in hopes to empower others to do the same. Through this journey, I discovered many women worldwide experience so many forms of oppression. I came across sad stories of women who were oppressed not only by male family members, but also by law, they had no way out. So the aim was to try my best to empower women who had a way out but maybe imprisoned by their own fear and ideas. I found this to be the saddest. 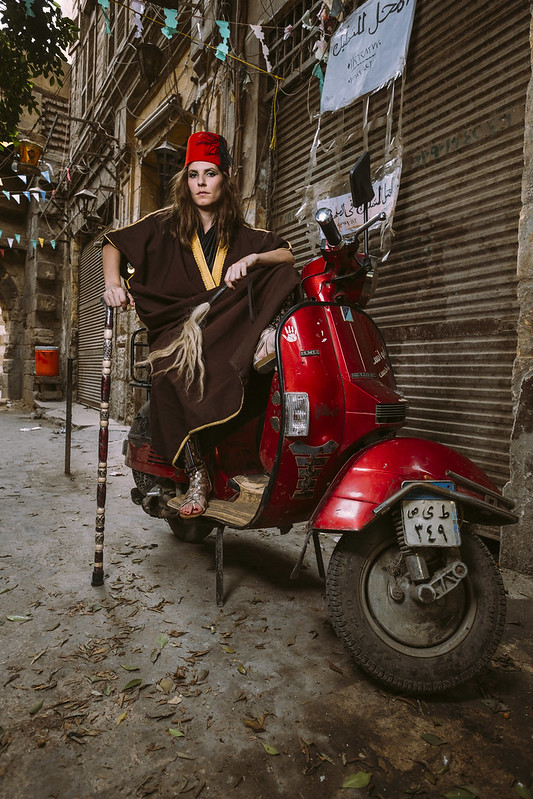 Another important notion is how we constantly get attacked when we stand up for ourselves. There are so many negative connotations attached to the word “feminism”. We are seen as man-haters, and give the implication we want to be too independent, pay for our own dinner and drinks, open our own car doors, etc.… It’s true this is the case for some women, and… that’s only because those women are angry and may have not yet learned how to deal with their anger. They forgot what it’s like to trust in good men. We need to really communicate clearly that all we want is the deserved respect, equal human rights and not to be abused and overpowered simply because we are women. Equal chances in the workplace if we have the same qualifications, equal pay if we have the same positions, etc. We are not asking to be a man! We really love being women. We know we are different. We do not want to compete, rather complete, we know we are not as physically strong and adore it when you help us lift a heavy suitcase and will tell you thank you, just please don’t put us inside of it.

Naguib Mahfouz‘s central work in the 1950s was the Cairo Trilogy, which he completed before the July Revolution. The novels were titled with the street names Palace Walk, Palace of Desire, and Sugar Street. Mahfouz set the story in the parts of Cairo where he grew up. The novels depict the life of the patriarch el-Sayyed Ahmed Abdel Gawad and his family over three generations, from World War I to the 1950s, when King Farouk I was overthrown.