7 Lessons from my Selfie Project

7 Lessons from my Selfie Project

I don’t do selfies. I can’t get my self to extend my arm and point the phone towards me, let alone buy a selfie stick… I’m one of those guys that thinks selfie sticks should be banned. I even started a series of posts last year called “F**k Your #Selfie”. I thought everyone who did that was a narcissistic douche bag.

Well, that all changed when I met Rockstar Photographer Marianne Harmony Zammaria (@ishootrockstars). We didn’t actually talk about selfies, but she said something in passing, ever so briefly, and it changed my perspective. She said she started taking Self Portraits (that’s the correct term before social media butchered it) in order to experience what her subjects go through while she’s photographing them. That got me thinking… I don’t have the slightest idea what it feels like to be on the other side of my camera…

First I had no idea what to shoot myself doing… So I thought lets start somewhere. Well… how about first thing in the morning… Shower and Shave…. This is what I got up to… 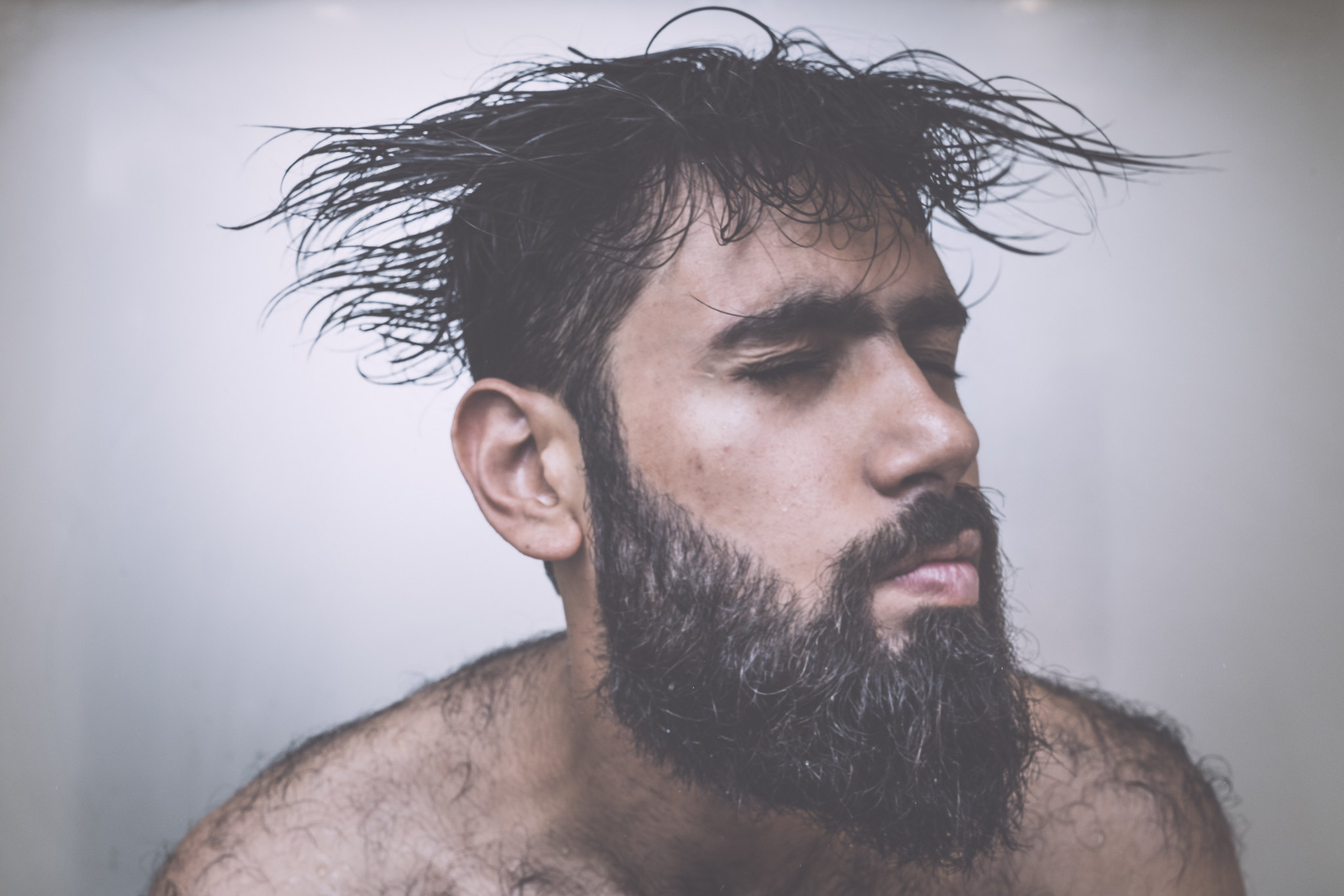 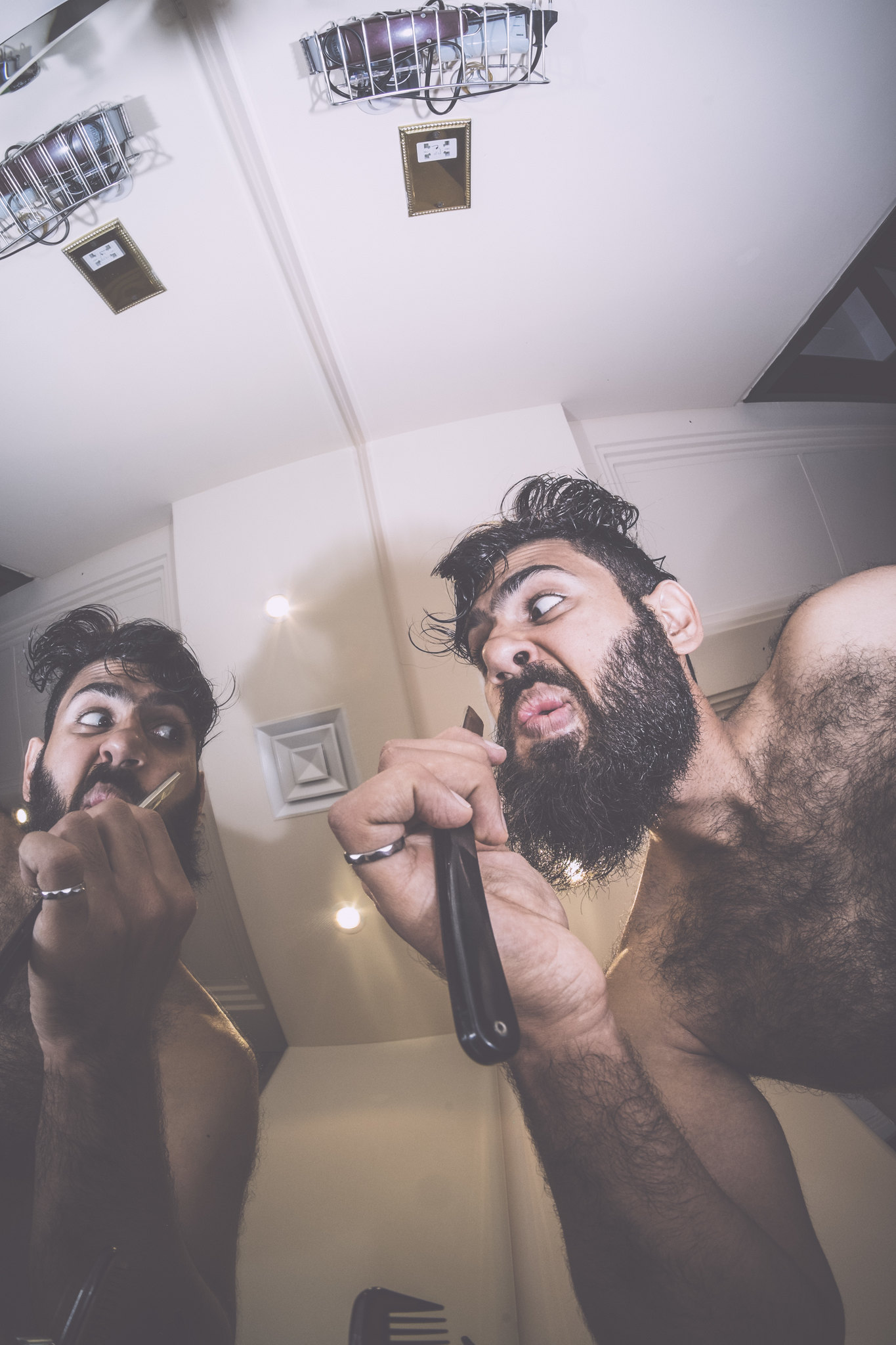 Okay. That was tough. I felt really weird being in front for the camera even though no one was watching, I was judging myself thinking… “Why are you doing this? This is not you at all.” But I pressed on. Didn’t really know what to do. Went for weird and goofy stuff. Didn’t really pay attention to lighting or composition. Then I though to myself, “Next time, I’ll think about lighting.

And so came the chance where I had my lights and backdrop set up for a shoot at Abu Dhabi TV. There was a little break in between where no one was around…. So I jumped in for one. Here it is… 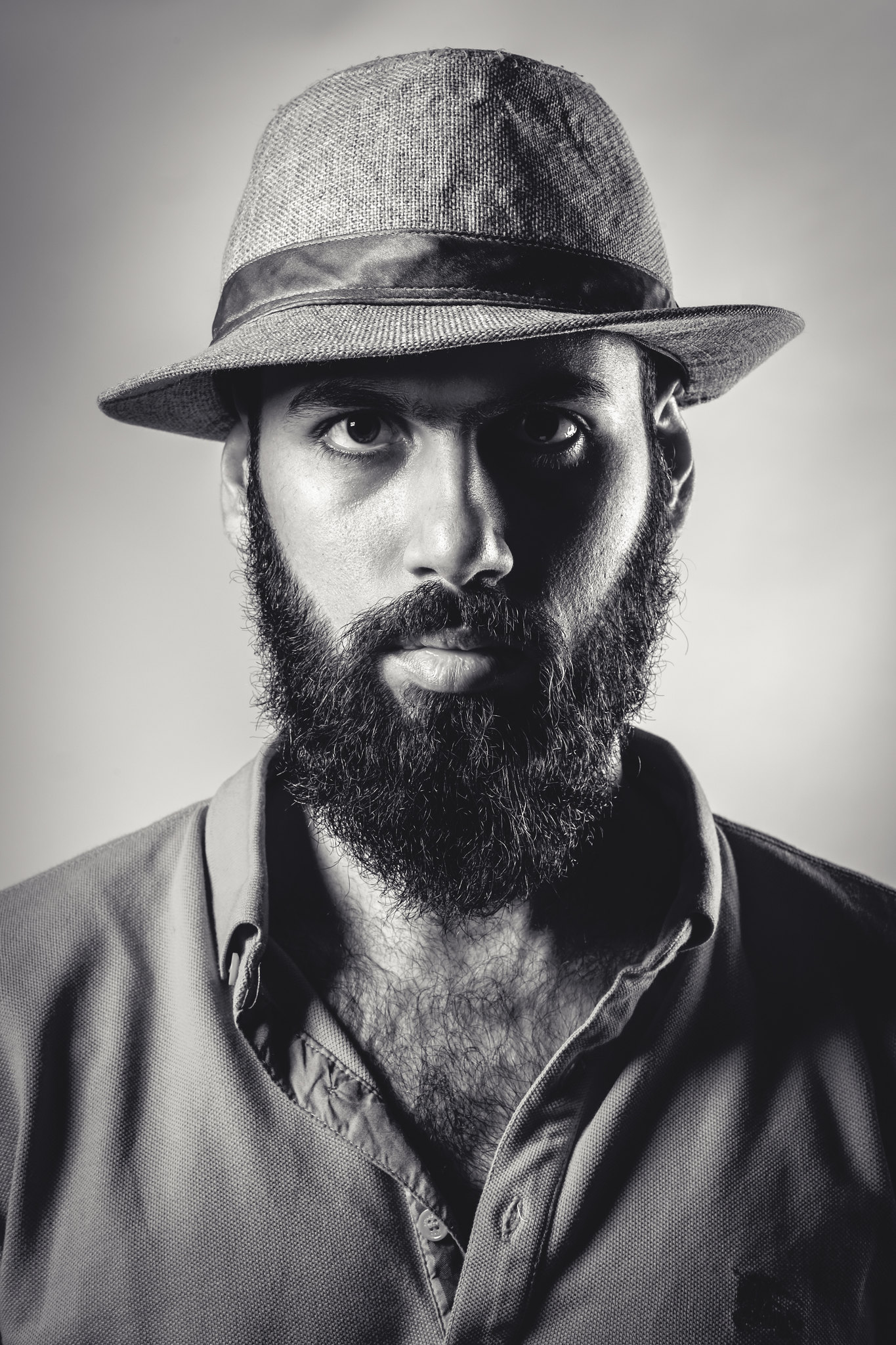 Being the second time around, it felt a little less weird. I felt like I knew what I was doing. Alright, its a cool portrait, nice lighting… but I don’t really feel like it says anything about me… Or if it says anything at all actually… just a photo.. with cool lighting… meh…. What else can I do…? Oh yeah… wait, some random composition thing… lets try this again… CLICK!!! 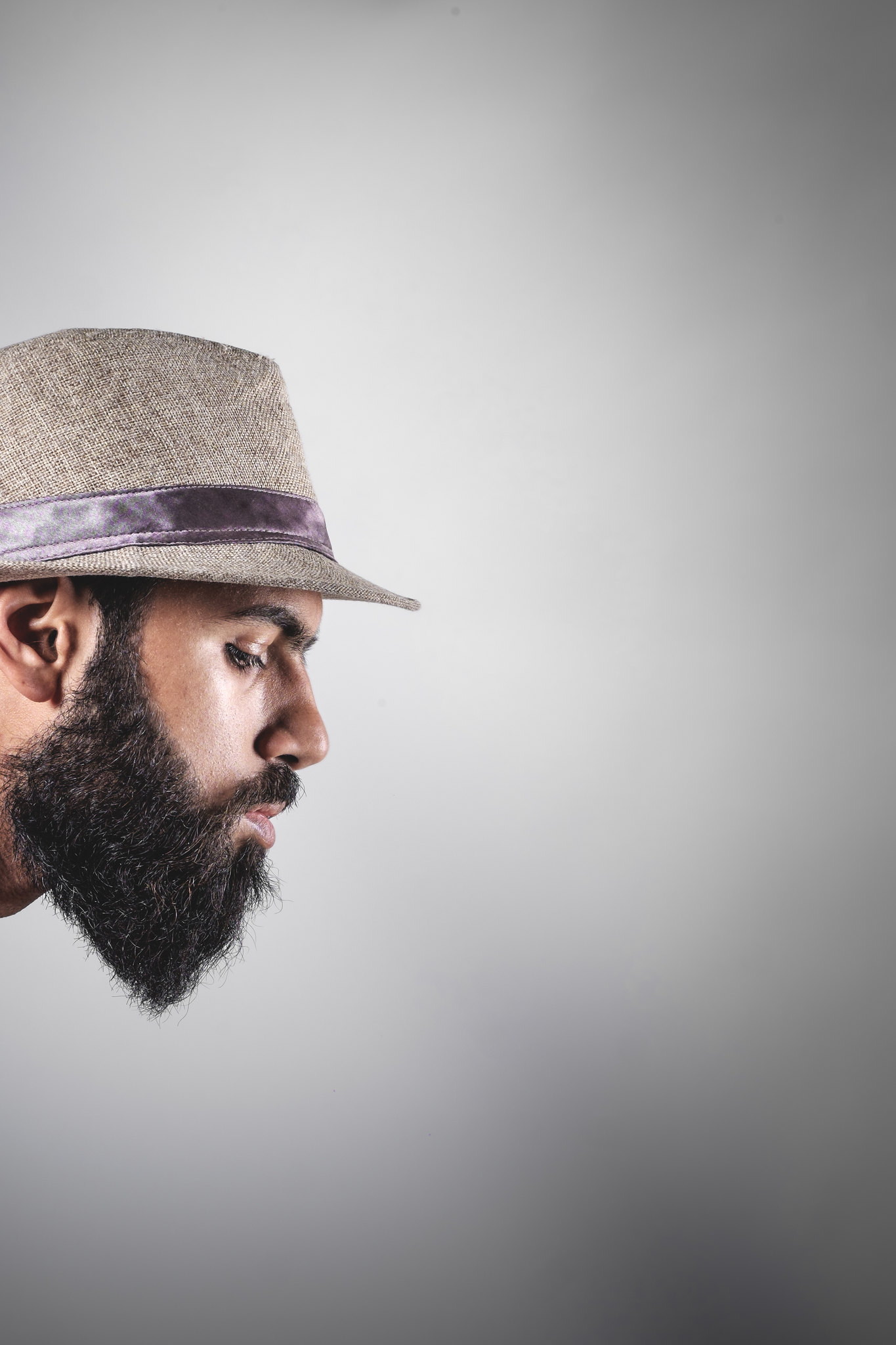 Okay I like this one… And I asked myself why. First I told myself “Yeah, its because I broke some rules and put my face somewhere else in the frame”… But later while editing, I was honest with myself. I think I like the shape of my beard… maybe the hat as well… probably the beard/hat shape combo. Point to whatever thing in particular… but generally, my vanity kicked in… And I hate my vanity. I hate looking in the mirror and checking myself out. I judge people who do that… And now I’m starting to like it….

But wait, hold up. There’s a lesson here. I learned that in order to make my model/subject/customer happy I need to compose and light the photo in a way to accentuate the parts that THEY like in themselves… not what I like in them.

Lesson 3: Immerse the subject in the emotion

Alright… what else can I do? What else can I learn? Well, I shoot a lot of musicians. Mostly live but sometimes they ask for a concept photoshoot for an single. So I though I’d try to come up with a concept based on a song. I was listening to “Gasoline” by Halsey at the time… on repeat. Not for the shoot, but I just….. really liked the lyrics…. so every time verse one would be over I’d rewind to hear the verse again… You can listen to the song HERE …. And these are the lyrics:

Are you high enough without the Mary Jane like me?
Do you tear yourself apart to entertain like me?
Do the people whisper ’bout you on the train like me?
Saying that you shouldn’t waste your pretty face like me? 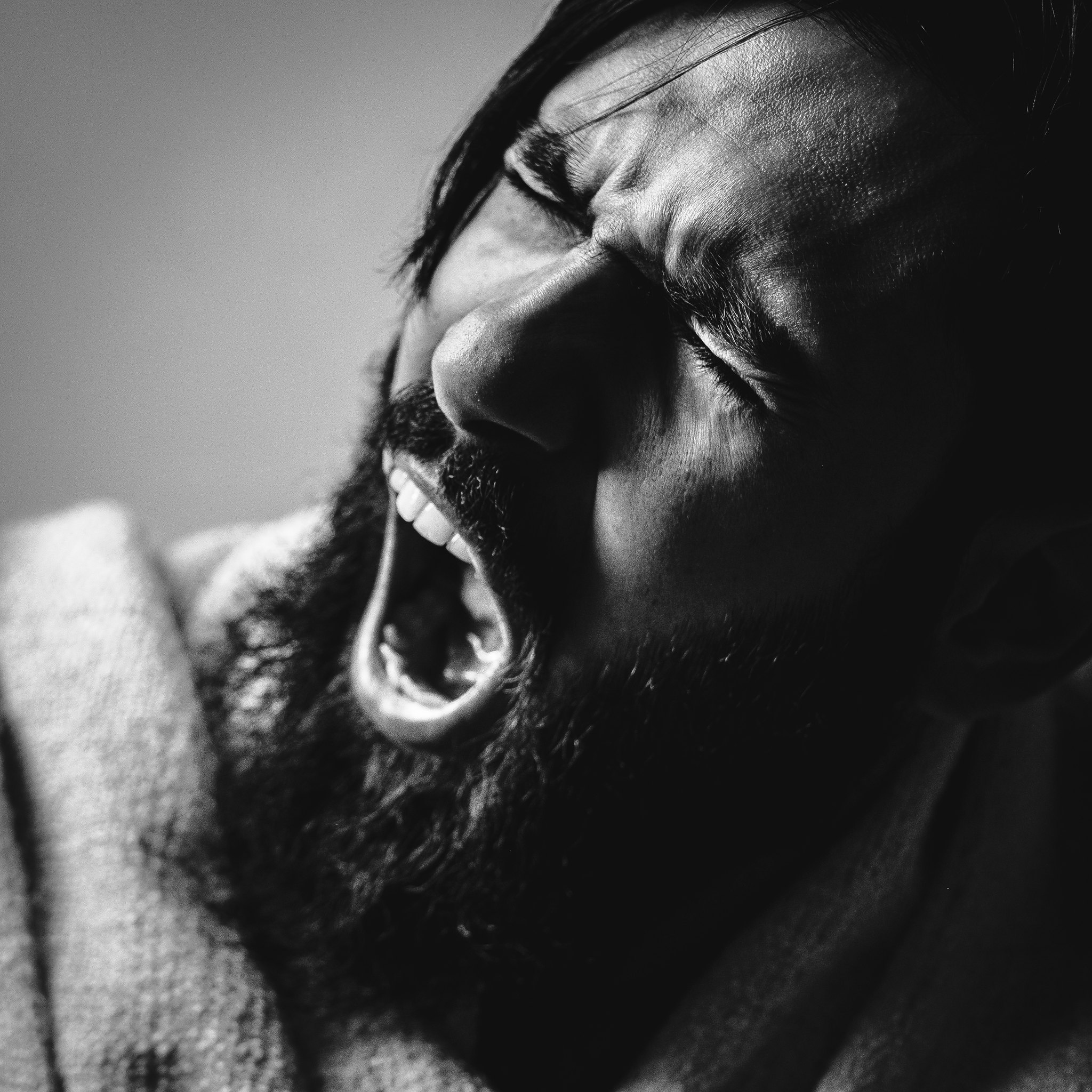 YES!!! Nailed it. This is my favourite shot so far. Natural light through my living room window. It took a few tries to get it right. I had to actually scream out loud in order to get that expression out of myself. Also, I don’t actually look good in this and I’m perfectly satisfied with the photo. Actually scratch that… I absolutely love it. Its not about me trying to look good, or even a concept that represents me. I’m not an angry person, or deranged, or in pain… I don’t drink so I’ve never bought a bottle of champagne…. Its the success in portraying what I set out to portray that gives me the satisfaction….

So… what’s the lesson here? Immerse the subject/model into the emotion you’re trying to portray as much as you can. Scream… louder if need be. Sound doesn’t show up in the photo, but the emotion behind it will.

Lesson 4: What you hate doing is sometimes necessary

This next one is inspired by facebook rants from members of The Recipe. They’re a Hip Hop group based out of Dubai and I’m personally a huge fan, not just of their music, but their personalities and opinions as well. (Click here for their Facebook page). This particular rant from Lucky “Swerte” Schild got me. If you’re an artist of any kind then I don’t have to explain… If you’re not then…. Ask your artist friend.

Countless times has someone looked me straight in the eye and asked me to shoot something for free in return for my name being on the flyer… Seriously bro? So… this is what I imagine them doing right after they finish talking…. wiping the sh*t off their mouth…. 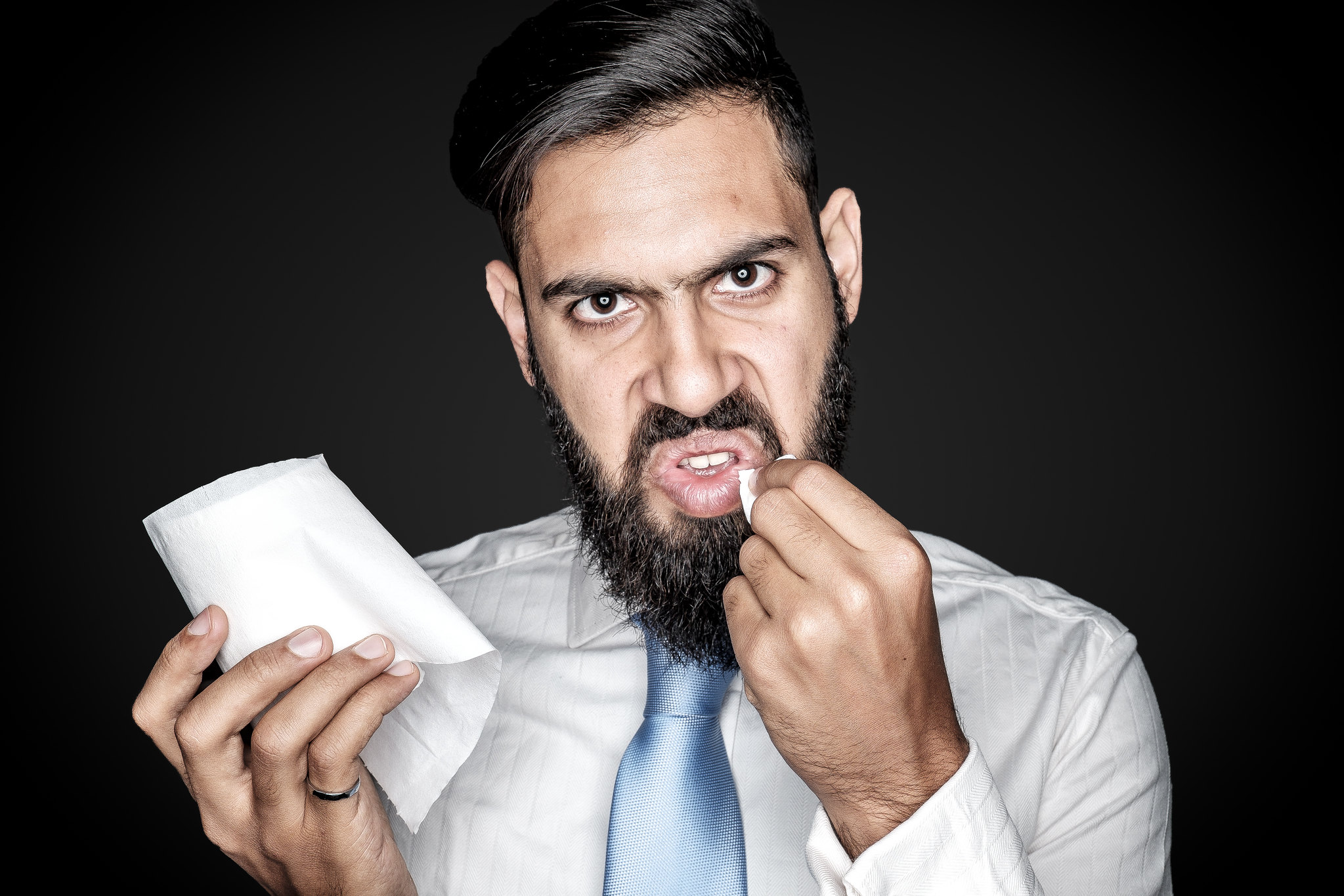 What did I learn from shooting this one? Well, there are certain techniques that I usually refuse to do. One of them is removingadding an artificial background in photoshop. I usually say “No, lets retake the photo with the background that you want.” But in this case I didnt have the gear or background on me to get what I wanted. So I shot this in the middle of the living room, and had to go into photoshop to remove all the junk in the  background and add this artificial background…. Usually I would call this blasphemy… but I’ve let my ego take a walk and I love this shot!!!

Lesson 5: Save your model’s energy until you need it

I was hired to shoot TV Presenters for a few programs on Abu Dhabi TV and the location was a green chroma studio. I had set my lights up and was ready to go pretty early and had about 20 minutes to kill…. so… naturally… I jumped in for a selfie. I stuck a fisheye on and wanted to get a dramatic perspective to show the whole studio…. and add some excitement by jumping around a little. I made a colossal mistake. I started jumping around before and put the lights in the right position or power for the shot… so by the time I was happy with the lighting I was exhausted. I’m not sure if i actually like this shot or if I was just too tired to jump around anymore… 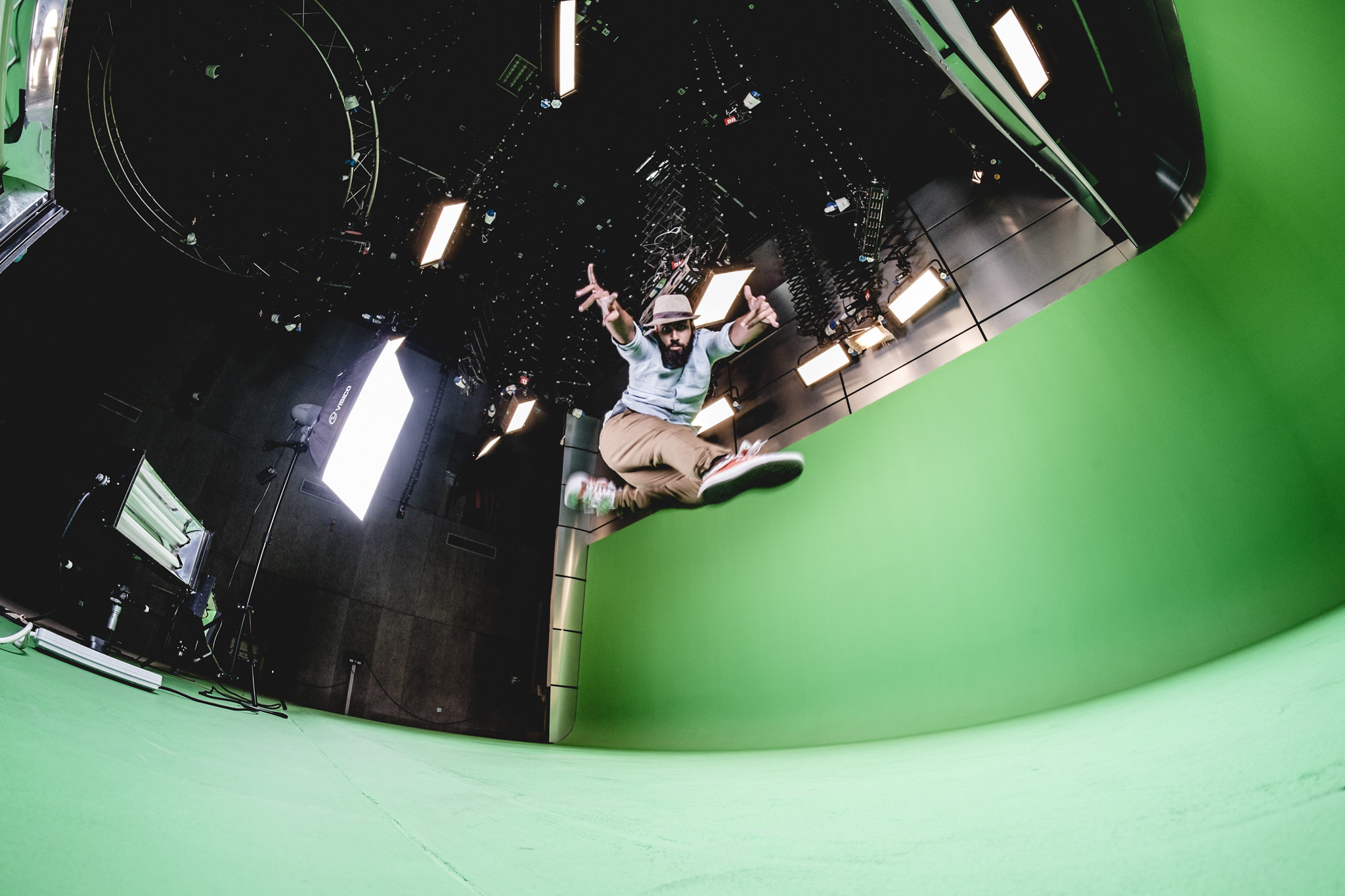 But hey.. lesson learned. Setup the lighting before getting your model to do anything…. don’t mess around while the model is putting in the slightest effort. Have them stand or sit relaxed in the place you want them to be, or use a stand in instead… maybe even a random object… But always leave the model till the very end until you are ready to take the shot.

Zeid Salman from 86 Cycles called one day and asked me to shoot the reveal of a bike he’d built with Tommy Boy (@rocketbyz) from West Coast Customs. The keywords in his description were “Glow in the Dark” and “Black Lights”. Now… I’ve done a few of these and I feel like I’m pretty good at these kind of shoots by now. (You can check them out here: Black Lights and the Fuji X-T1).

I decided to get there really early and have lunch close by. I scouted the location before anyone got there and found that it was smaller than I had imagined and very cluttered so my whole plan changed. I initially had a black background and a pair of studio lights with me along the the 56mm to shoot portaits of Zeid and Tommy Boy… that had to change to a 14mm lens with speed light and a ring flash because of the space. Had I not arrived there an hour earlier I probably would not have had time to change my plan and try out a few shots before my clients arrived… 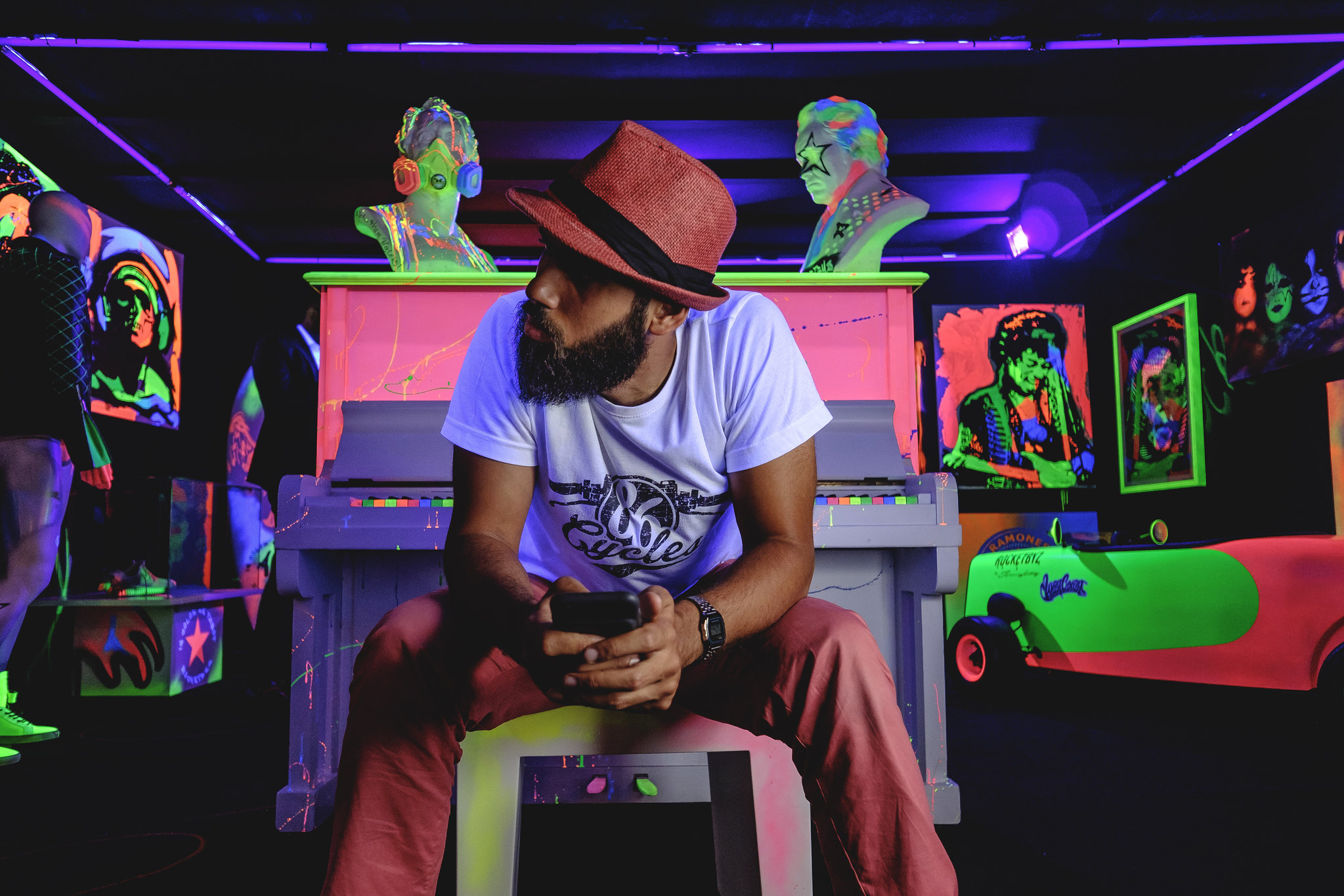 Lesson 7: Ask for help
As you can tell by now I love my beard. I’ve been using different fragrances of beard oil from a Dubai based company called Organic Beard Co. My favourite one had been “Mint”, but I didn’t realize that until I ran out of it. So… I decided to express my love for the Mint Beard Oil by putting mint leaves in my beard for a self portrait. Now… The logistics were more than I could handle myself so I asked my darling wife for help…
Mind you, she almost has absolutely nothing to do with photography… (The word “almost” is there so can later use it in my defense)… But regardless, we made it work. I set up the lighting and the camera settings, she setup the mint leaves in my beard, a little direction about composition from me, and after a few failed attempts because she changed the aperture by mistake…. We came up with this shot…. 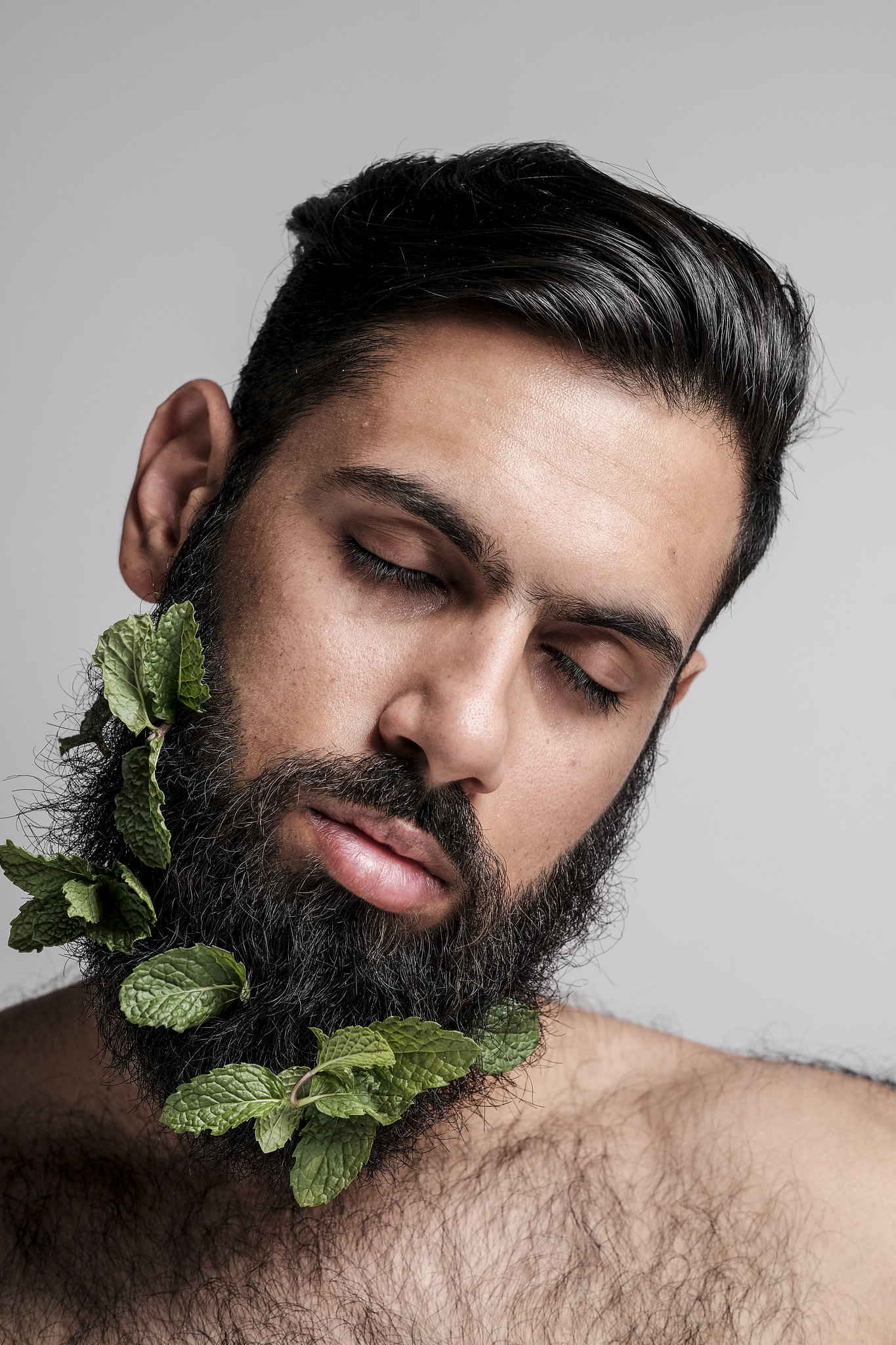