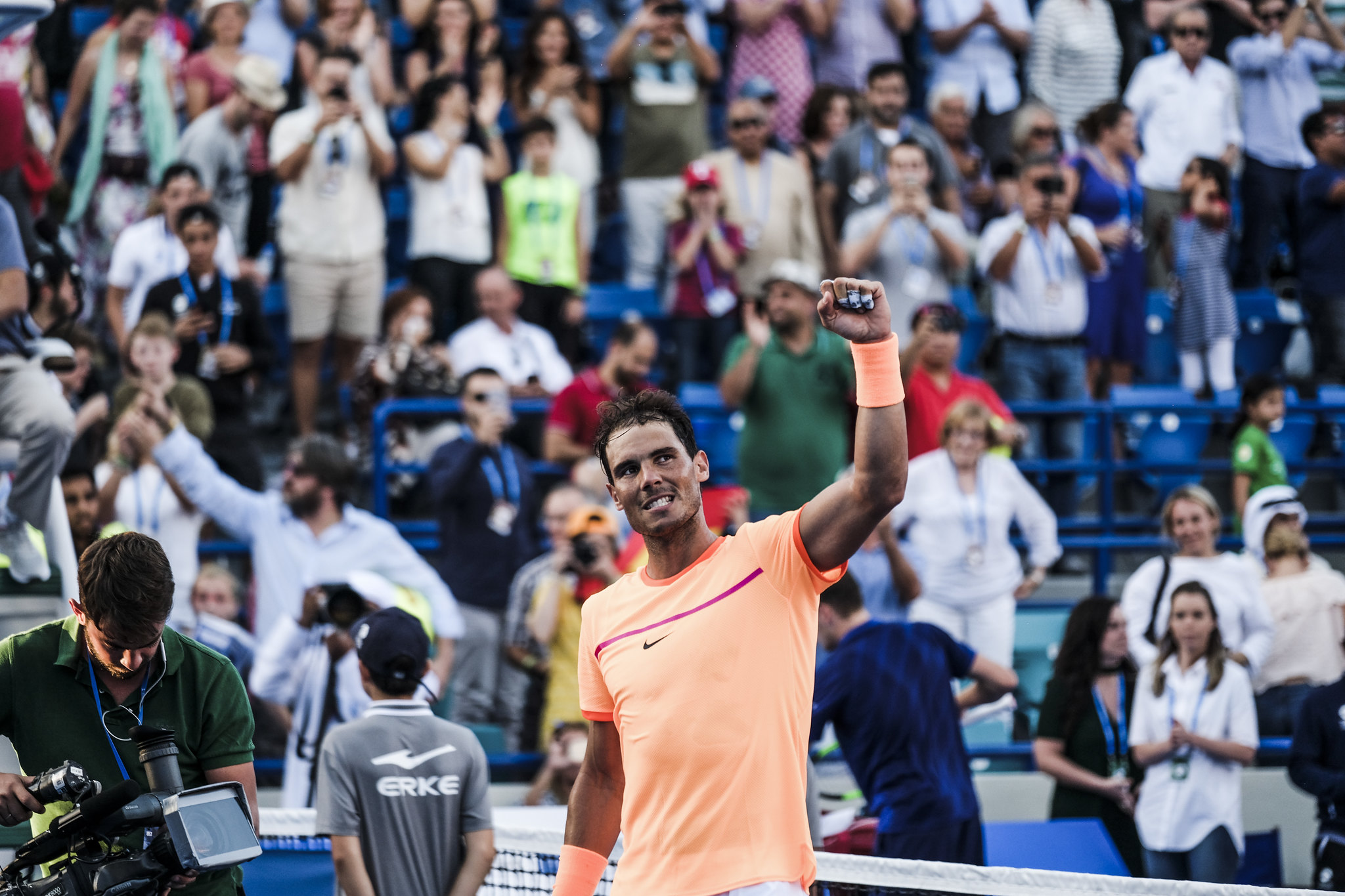 A few weeks ago I had made a mental note to get into sports photography. I don’t really want to get call it a “resolution” so it doesn’t sound cliche but it’s a intention that just so happened to come about at the end of 2016. So call it what you want. Before 2016 was over I was given the chance to shoot the Mubadala World Tennis Championship in Abu Dhabi so I decided not to wait till 2017 and jumped at the opportunity.

Walking into The Zayed Sports City tennis stadium brought back a million and one memories. I had completely forgotten that the tennis court was my second home as a kid. Let me drive the point home; I was ranked 4th in the UAE in the under 16 yrs category. Now you’re probably wondering what happened? Why did I stop playing tennis? Well, girls dig guitarists more than tennis players so I picked up a guitar and did the band thing which led to me marrying the girl of my dreams, so no regrets there really.
The first match was Rafael Nadal vs Tomas Berdych.  I quickly realized that I had to switch my shooting style from slow staged portraits to fast erratically moving subjects. Bring on the continuous focus and 8fps. I overcame this not so steep learning curve while watching Rafael Nadal take his first set in 26 mins. Not a bad way to learn eh?
After playing around withy settings I settled on a shutter speed of 1/500 s; any slower then the player is blurred but any faster then everything freezes. At this shutter speed the players face is frozen while the racquet and the ball are slightly blurred to give a feeling of motion. I was on f2.8 on my 50-140mm all the time and adjusted the ISO manually and left at the correct exposure from then on. No need to have the camera on auto since the light is constant throughout.

I took my learnings and came back the next day armed with a battery grip attached to my Fujifilm X-T2 to give me a whopping 14fps burst rate for the first game of the day, Andy Murray vs David Goffin. In this match I watched the world number one (Andy) struggle against the world number 11. Andy, frustrated throughout the match did not keep his emotions to himself, which made for great photos. David Goffin ended up taking this match and I realized I had made a mistake. I spent most of my time shooting Andy thinking he would win. Alright then, that was lesson two.

Onto Rafael Nadal vs Milos Raonic. My gut says Nadal but hey, I just learned lesson two about 15 mins ago so I better apply it. Just before the match started my buddy mentioned that Milos Raonic was known for his fast serves, and my god does he serve fast. I haven’t seen a serve so fast since Pete Sampras. Then again, I haven’t watched a tennis match since Pete Sampras. So lesson three kicked in; stories. I tried to incorporate that in the photos showing the screen with the service speed on it. That led to a few side stories as well. Nadal won this one eventually and I took home a few images that I was proud of.

Lesson four was a post processing lesson. Shooting two games at 14fps left me with more RAW files that I had the patience for. My computer was screaming at me. However, I realized that I really didn’t edit much. The exposure was always spot on since the light was constant and I’m pretty good at framing exactly what I want so there was minimal cropping. So, why shoot RAW? Luckily I had my setting to shoot RAW on one card and JPEG on the other. So I just used them instead.

On December 31st 2016 at 3pm the finalists Rafael Nadal and David Goffin entered the court. I was to take all my learnings from the past 2 days and apply them in the next couple of hours. To add an extra challenge I decide that I would try to beat all the international wires and publish this post before any of them; so my workflow had to be on point.

When the match started I found myself trying to take the same journalistic shots I was achieving in the last two days. To add to the similarities, Nadal was wearing the same outfit for all three days. My inner artist wasn’t satisfied so I decided to borrow a few tricks from my portrait life. The sun was just where any photographer would want it to be at 4pm; 45 degrees high and casting a beautiful shadow of the players on the ground. Throw it the straight lines of the tennis court and you’ve got pretty good ingredients for a great photo. So I went up top at the opposite side of the sun to shoot the players in short light (photographers look up what short light means if you don’t know). Now I was beginning to be satisfied.

Coming out of this experience I learned that as a knowledgable photography you can be thrown into any situation and quickly learn to produce usable images, however, it might take a few trials to get to a level that you’re satisfied with. Have a look at the images below and please leave a comment and let me know what you think.