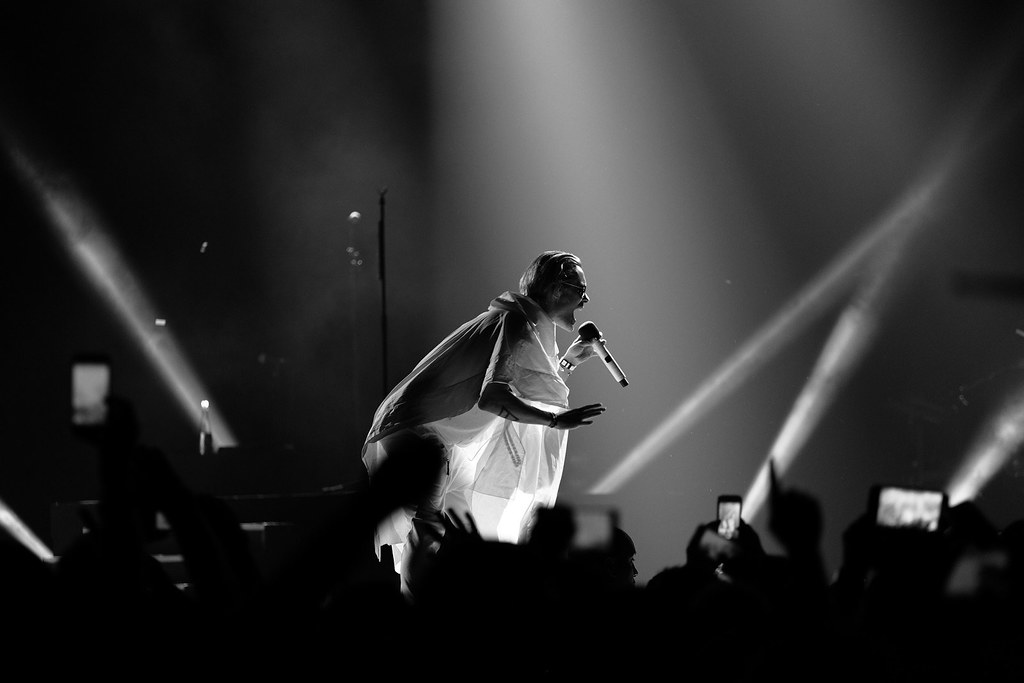 Dubai Music Week was just around the corner and I had my eye on the XF50-140mm f2.8. I’d tried it out at the Fuji X Walk in Abu Dhabi a few weeks ago and really liked the build and image quality where everything was brightly lit and quite static, but does it hold up in a concert environment where the lights are flashing and the rockers are head banging?

Well, FujiFilm Middle East came to the rescue and decided to loan me a bunch of gear to try out and review. So over the next few days I’ll be using the following:

The first thing I noticed is how small my setup was. I usually have one of those hard cases that I roll around with, and it’s just one camera and a bunch of lenses. This time is was two cameras, a lens on each and a few extra batteries. I already felt lighter and had a good feeling about the the coming few days. No need to leave anything behind while shooting, and I could go for hours.

ps. Those are ear plugs, and a battery pack for my iPhone.

The Artists
Before we get into the artists I’d like to give a major shout out to all the local acts that come out and perform at these events for the love of doing it. Without you these events would not have any meaning. I did catch a lot of the local acts and I apologize if I did not make it your show…. So featured here are:

I’m a big fan of how Fuji renders the JPEGS so I try to setup up the camera in a way where don’t actually have to touch the photo. Most photographers would crucify me for this… But hey, it works for me.

Setting up for the correct exposure in a concert is more of an estimation. The the lights are changing way to too fast for you to rely on your camera to meter correctly. The thought process is as follows:

You’ll realize that everything in this blog is monochrome. I don’t usually do that, but I was feeling a black and white theme for this one because when I first arrived, the colors on the stage were really cheesy…. They did get better throughout the night and on the different stages, but I had made up my mind already to go black and white…. So that’s what I did…. And now I’ve given other photographers ANOTHER reason to crucify me…. Sure… Go for it.

For most (probably all) photos:

I tried to cycle through most of the autofocus settings to see which one worked best. The common denominator here is the continuous focus. Single shot focus just doesn’t work in a concert environment….. Actually that’s a lie, it works for crowd shots, which I’ll discuss later. Here are my views

XF35mm f2
To be honest, I wasn’t too excited about this lens when it was handed to me…. But after the first few clicks I was hooked. It’s just the right focus length to get really nice compositions with the artist, the lighting, and other random elements on stage.

The aperture being at f2 didn’t actually bother me (since there’s another 35mm f1.4). I can’t compare them yet since I haven’t tried the other one.

I don’t think you can show up to a concert without this lens. Absolutely essential for concert photography. Nothing really to talk about here except that the auto focus on this lens is quite superior to any other fuji lens out there. It’s just generally  faster. The photos tell you everything.

I‘m kind of in the fence about this one. The pros and cons actually weigh the same so I kept taking it off and putting it back on…. Still can’t decide if I like it or not

Obviously the pro is that…. You get a tighter shot. Butting wasn’t thaaaaatt much of a difference. It was nice to have but not really necessary

The not so obvious con is that it reduces the aperture to f4…. So it lets significantly less light in and reduces the depth of field. To compensate for the exposure you would need to bump up the ISO by a full stop… And I’m not sure if I like making that sacrifice.

So to our fuji peeps… If you’re reading this, either do something about the aperture reduction to it or give us a more significant zoom…. something like 2.5x would be nice… So we feel like it’s a different lens all together

Concert photography is about setting your self up the right way and then waiting for moments. That moment when the artist is doing something awesome (headbang, jump, scream, etc….) and the light hits them the right way actually happens quite often but only for a split second. So you can capture many of those moments in a short time frame with different lenses and angles.

So set up your exposure as explained up top…. compose your shot….  continuous focus on the subject….  Then listen for the drop in the music. Release the shutter about a second before the beat drops while shooting continuously at high speed. That’s usually the moment when the lights do something wild and the artist has their rock n roll pose on.

As for crowd shots, the same timing principles apply, but a cool trick is to use single shot focus, and focus on the line of people that have there hands up (not the artist). Its usually the people at the front.

Hope this helps someone
Waleed Shah